When Transitional States was hosted at El Centro de Cultura Contemporània de Barcelona (CCCB) in Spain last year, it offered visitors the opportunity to engage with complex issues around hormones, gender identity, and representations of trans people in the media.

Throughout discussion the panellists focussed on trans narratives and how the media presents, both now and historically, trans individuals. 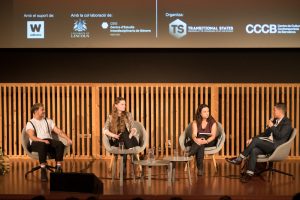 Diego, Fox and Owl explained how the absence or silencing of trans voices during production has led to poor and heavily simplified portrayals, resulting in dramatically different presentations and agendas between creations by cis- and trans-led teams. For example, cis production teams deliver content that follows a ‘wrong-body’ narrative, portraying trans individuals as born into a male body when they are female – and vice versa. However, this narrative overlooks important discourses about what it means to be trans.

Such representations are among the most prevalent – and the most damaging – as they fail to explore the overall life of a trans individual, including the problems and successes of both individuals and the trans community at large. Moreover, the ‘wrong body’ narrative strictly casts gender into binaries – ‘male’ and ‘female’ – when in reality, gender is much more fluid. Indeed, the proposition of male and female specifically excludes those who identify as non-binary or genderqueer. 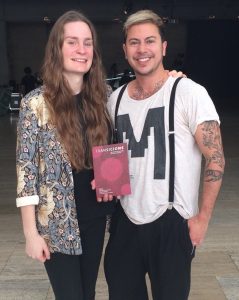 In a real-life example, Fox described their experience of appearing on the UK television show, My Transsexual Summer (Channel 4, 2011). Throughout the show they were coached to say they were “born in the wrong body; [they] should have been a boy” during interviews, with the production team justifying such as approach because “the audience is not going to understand any of that [the terminology]” of being non-binary. As a result, Fox explained that they were unable to explore the “nuances of being trans”, instead being restricted to the upheld gender binary of male and female.

Not only does this misrepresentation undermine the public’s ability to understand trans lives and discourses, it also alienates trans audiences. The production company’s insistence on upholding the ‘wrong-body’ narrative not only reinforces this as a singular option, but also prevents trans people from being able to explore and understand their gender identity. 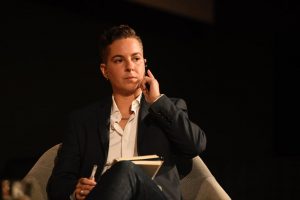 The public discussion that followed raised issues such as feminism and the representation of trans lives in Western media, and offered the audience the chance to question panellists on their personal, artistic and academic interests.

Additional events were also held, attracting a range of people from across the globe. This included an academic conference, Sexology and Development: Exploring the Global History of the Sexual Sciences, which focussed on how sexual sciences such as sexology have been presented globally and how representations and understandings differed world-wide. It also also why the nineteenth century medical and scientific fields fixated on sexuality and gender, and the implications that this knowledge and the theories that stemmed from it have had, both historically and today.

Finally, two further public events were held as part of Transitional States’ tenure in Spain. The first was a conversation between trans activist, Miquel Missé and biologist and activist in gender and diversity, Sam Fernández, which discussed present-day discourse, practices and policies affecting people who do not fit within the binary system of gender assignment.

The second event was a public lecture by philosopher, Paul B. Preciado, called ‘Gender, Sex and Sexuality in Techno-Patriarchal Capitalism: Towards a Systemic Mutation’, where Preciado critised current gender politics in the Western world.

If you missed any of these events, most are available to watch through the following link.

Once again, Transitional States was able to start conversations about topics that are often not discussed and provided the opportunity for a meaningful exchange of both ideas and experiences. The talks and exhibition in Barcelona also provided guests with the chance to gain insights and education about people who have traditionally been marginalised or silenced.