by Cristina Sain and Max Schiozzi

Hosting Transitions: hormones between art and science at Cavó in Italy offered a unique opportunity to showcase a marginalised topic and offer the public insights into how hormones can impact people’s lives in many different ways.

We were initially interested in hosting the programme after learning about the Transitional States exhibition in Bologna in November-December 2018. This exhibition’s ability to raise discussion and debate in a positive way was very much in line with what we aim to achieve at Cavó.

Transitions: hormones between art and science forms a continuation of our broader efforts to raise discussions about identities through our Varcare la Frontiera festival. This festival, which we have held since 2012, looks at identity with a particular focus on the political, social and cultural contexts of contemporary life.

In bringing this exhibition to Trieste, we offered audiences the opportunity to consider and reflect on the theme of identities. With an increasing representation of trans people in the media and a growing recognition of trans people in society at large, we aimed to help start conversations about a community that is often under-represented and stigmatised at all levels.

To help increase exposure and ensure maximum impact, we timed the exhibition to coincide with the FVG Pride and worked closely with the exhibition’s curator, Dr Chiara Beccalossi, and in collaboration with MIT – Movement Identity Trans and Arcigay Arcobaleno Trieste Gorizia ONLUS, well-known and respected groups who supported the exhibition and advised on the accompanying programme. 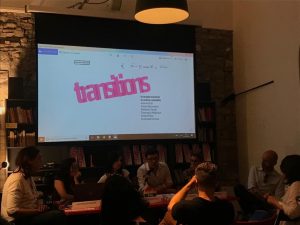 Accompanying Transitions’ strong stories about both individuals’ and society’s use of hormones was a focused discussion on the use of hormones in the part and present. Bringing together the exhibition curator, Dr Chiara Beccalossi; trans activist, Antonella Nicosia; psychotherapist, Federico Sandri; and urologists and surgeons, Dr Chiara Perin and Dr Francesca Migliozzi, we explored both the history of hormone use and how they are used today, noting both the similarities and disparities between the past and the present. This discussion also considered how the constructs of trans identity might be broadened and covered the various surgical methods some people use to ensure their body matches their gender identity.

Having engaged a broad range of people from across the community, from artists and feminists to regional council representatives and activists, Transitions promoted both a cultural experience and acted as a catalyst to create dialogue between people and about issues that influence many people’s lives, both locally and abroad. With a particularly strong impact in bringing together people from different generations to engage in discussions, Transitions continued to develop and understanding across a broad sector of society.