Trans Self-Representation: YouTube and the Rise of DIY Media

Broadcasting the Trans Self: New Media Images and Perspectives was the third and final public discussion of the Transitional States events programme in Bologna, co-organised with the MIT – Movimento Identità Trans, one of the oldest trans associations in Italy and active since 1981. The speakers were trans and non-binary activists, Fox and Owl, Richard Thunder and Storm Turchi, and they discussed how YouTube and digital media have contributed to give voice to the trans community in the last decade or so. This blog will expand some points that were raised during the discussion and provide some data to broaden the perspective. 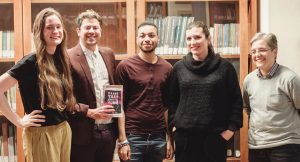 YouTube is very popular among young people, with 94% of 18- to 24-year-old Americans using it. Despite the three top worldwide YouTube search queries being ‘Despacito’ (yes, that song), ‘BST’ (a Korean pop band) and ‘Bad Bunny’ (a Puerto Rican, Latin trap and reggaetón singer), videos can be a powerful tool, not only for entertainment and music, but also to convey concepts and spread information. Likewise, videos can be used to raise awareness of trans people and some of the issues they face.

The trans population in numbers

In 2017, researchers at UCLA used government data to show that 1.4 million (or 0.6% of the US population) identifies as transgender. The same study estimated that 0.7% of teens aged 13 to 17 also identify as transgender, although this was based on estimates taken from the adult data. However, in 2018, another study showed that much higher rates of 14 to17 year olds identified as transgender, approximately 150,000 or 0.7%.  While this represents a sizeable demographic, it does not mean that more trans people are being born, but rather it is more acceptable to ‘come out’ and live as trans. Could it be that platforms such as YouTube and other digital media are providing a forum to raise trans awareness and identity politics?

However, trans people using platforms such as Youtube and other digital media are exposing transphobia and providing a different narrative, with terminology and representations becoming more accurate.

Sharing is the keyword

The key word is ‘sharing’. Sharing experiences as trans people, dating encounters, advice on how to apply makeup, how to hide genitals, how to properly bind the chest to hide breasts, and being trans and gay/lesbian. Sharing is a basic necessity within the trans community. What one person knows could really help someone else’s situation. For example, hiding genitals or shadow beard are huge issues and, if well hidden, could literally save a person’s life.

Currently, most of the vlogs are quite similar to stand-up monologues, often lasting ten minutes and providing some easy and funny editing effects. As with all pop media culture, trans YouTubers have also become influencers. Gigi Gorgeous is among the most famous, although others such as Stef Sanjati, Ty Turner, Maya, Princess Joules, Nikita Dragun, Jammidodger, Sam Collins, and Alex Bertie have strong followings. My Genderation, a complex video project that includes interviews, video portraits and fiction, has been created by non-binary trans activists Fox and Owl Fisher, and focuses on trans lives and trans experiences. Riley J. Dennis, a trans lesbian, talks about feminism and politics in her Vlog and Contrapoints is a unique project that joins political stand-up speeches, video journalism and a sci-fi inspired staging.

YouTube also features series such as As We Are, and above all Her Story, which features a number of trans people and activists both on screen and as part of the production team, and tells the story of a relationship between a trans and cisgender woman, the struggle for a trans woman to be outed and the transphobic suspicion of some lesbian women towards trans women.

As you can see, YouTube shows can demonstrate how trans people can make entertaining, clever and useful series that are relevant to their audience and play an important role in raising awareness about trans issues. By using social and digital media formats, trans people have been able to create their own narrative and have avoided being rendered one dimensional or stereotypes as outlined above. Through a broad range of techniques and approaches, the trans community is able to reach and influence a broad range of audiences provide much needed support and advice across the community.