Transitional States took place in February 2018 in Lincoln, during LGBT History Month. An annual event, LGBT History Month has been held in the UK since 2005 and provides people with the opportunity to focus on the culture of their community, celebrate its victories, and continue to call for equality through protests and rallies.

Chloe Unsworth helped the Transitional States Programme Director, Chiara Beccalossi, as the Public Engagement Support Officer, and worked closely with students at the University of Lincoln as part of the programme, especially in the development of the cases of objects dedicated to demonstrating and explaining how they express their sexual or gender identity.

When asked about the students’ experiences taking part in the exhibition, Chloe commented that it meant a lot to them.

“Not only was it an amazing opportunity for students to celebrate both their gender and/or sexual identity during LGBT History Month, it was also a fantastic for them to see the University embracing the occasion fully and supporting this programme,” said Chloe.

The educational aspect of this programme provided a level of understanding and safe environment for LGBT students to engage with objects and stories that resonate with them. It also allowed the wider student population, who are not necessarily involved in the LGBT community, to immerse themselves in and to understand the successes and struggles of their peers.

Chloe was clear about the benefits students gained from taking part in Transitional States.
‘It gave LGBT students the opportunity to see themselves represented in the University in a way that hasn’t been done before; with the programme’s videos, objects and public discussions leading the way for conversations about gender and sexuality that weren’t there before either.’

There were three public discussions in total, each focusing on a specific topic related to the programme’s main theme of hormones. The first was on the representation of trans people in the media, and how the discourse and story lines including trans people have (and have not) changed over the past few decades.

The second discussion covered the medicalisation of LGBTIQ people, looking at how the scientific and medical community has categorised LGBTIQ people in the past and today, while the third focussed on how women use hormones, with a particular emphasis on the contraceptive pill, IVF and new medical technologies. 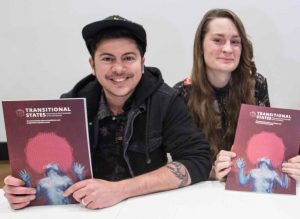 The discussions were both enlightening and refreshing, especially as they covered topics that are not usually topics for public conversation. Perhaps the most memorable event featured non-binary trans activists, Fox and Owl, whose presence was especially important to many of the students as the trans community has often received less focus and experienced significant discrimination. Fox and Owl have co-written the book Are You a Boy or Are You a Girl?, which helps young children explore gender diversity, and Fox helps run My Genderation, a project that fights for the rights of the LGBT community.

The students taking part in Transitional States invited Fox and Owl to Lincoln because, as Chloe noted, they are ‘are inspiring and incredible people. They are both very talented and are helping to change England’s (and the UK’s) laws and attitudes towards trans people and helping the country to be more inclusive.’

The Transitional States programme helped raise awareness about a community that existed only in secrecy for many year. This project has shown that the LGBT community has far more support than it did a decade ago, or even just a couple of years ago.

Thank you to Chloe Unsworth, Fox and Owl, and of course, to the students who bravely put parts of their lives in boxes for everyone to see.