A Safe Space for Students

In February the University of Lincoln hosted a video art exhibition and a programme of events, Transitional States, led by Dr Chiara Beccalossi, a senior lecturer at the University. Society often gets caught up in the politics of discussions surrounding gender and identity, however the exhibition created a safe place for students, who curated three cabinets of objects that showed how they expressed their gender identity.

One object was a handmade chest binder supplied by Sam. This item appears to be well worn and, as the owner’s description said, it was used not only by them, but also a friend. Sam uses this item to define their struggle with gender identity, as well as society’s need to put everyone into one of two categories, male or female. The binder symbolises the freedom that de-gendering yourself can provide when you do not feel like you belong in one of two boxes. The binder allowed Sam to put themselves into a third box, ‘other’.  As much as a binder being seen as freeing is a contradiction in itself because of the restriction of the garment, the freedom it gave is evident through Sam’s description. There are non-binary people and it is time our society recognised them. 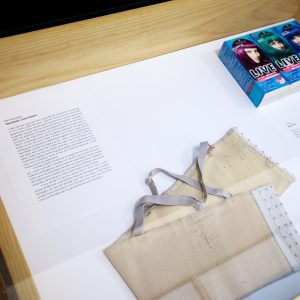 Gender dysphoria is a common struggle for those transitioning while they wait for the medication and sometimes surgeries that allow them to feel comfortable in their bodies. As with Sam’s binder, Brooke uses latex silicone breast forms to ease some of the body dysmorphia she experiences while waiting to be prescribed the hormones that will alter her body. Brooke expresses how these breasts can be expensive and do not last forever. In her description of the object, she discusses two pairs of forms that have ripped and been kept together by duct tape. The money and effort that goes into maintaining something that a lot of cis-gender women would not think twice about is quite astounding. Brooke’s right to be able to feel comfortable in her own skin should not come at a cost.

Jennifer displayed a pack of pills and details the necessity of birth control, not only to prevent pregnancy but also to control the pain cis-gender women can experience during menstruation. Jennifer talks about how menstruation is a ‘taboo subject in our society’ and how cis-gender women have to conceal the symptoms. Since the pill was first created in the 1960s and allowed to be used en masse, it has helped women gain more control over their bodies. However, Jennifer explores how those who use hormone pills are restricted and shamed by their bodies natural functions, and held liable for anything that happens, from unwanted pregnancy and periods to the side-effects of the pill, which can include mental health issues and a range of physical ailments. 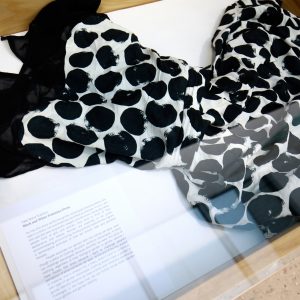 The focus of Tate’s contribution was stereotypes and how people are perceived because of their outward appearance; they present a black and white dress. Tate wants to challenge gender identity by saying anyone can wear that dress. The idea that if cloth is manufactured in a certain way it means you are female, but in others male, is ridiculous. It is an archaic thought and has no place in today’s society. Yet as Tate acknowledges it is an argument that continues to prevail.

Chloe explored perceptions of herself and others who use hair-dye in ‘unnatural’ colours. Hair-dye alters how its users are perceived by the public. From loud colours to covering grey hair, hair-dye is in essence a way to project your character. Not only is it a form of self-expression, it also represents a way some employers and people in society make snap-judgements about people. Chloe express her character through the hair-dye and uses it as an act of ‘micro-rebellion’ against judgemental people. There is a common misconception that a person’s hair defines their character and that long blond hair has feminine qualities. However, these ideas are based on archaic ideals about people’s appearances and lack diversity. Chloe’s object is different from the others as it does not explore representations of the self, but how an object is used to change one’s own identity.

This exhibition questions boundaries and offers glimpses into the lives of people discovering who they are through experimentation and potentially life-long changes. The freedom to trial different experiences to discover yourself is not only important, but vital to development. Every item in the cabinets is a representation of gender identity, whether embracing or disregarding it. The contrast of the binder that Sam uses to simply be as they are, Brooke’s breast forms, and even the hair dye Chloe uses as an act of gender rebellion shows that each person has their own struggles and ideas about what gender is and what it means to them. This exhibition helped establish an environment where stereotypically private objects and issues became topics for public discussion. Opening up the debate has been another step to freeing the idea of gender, letting it be whatever each individual wants it to be.